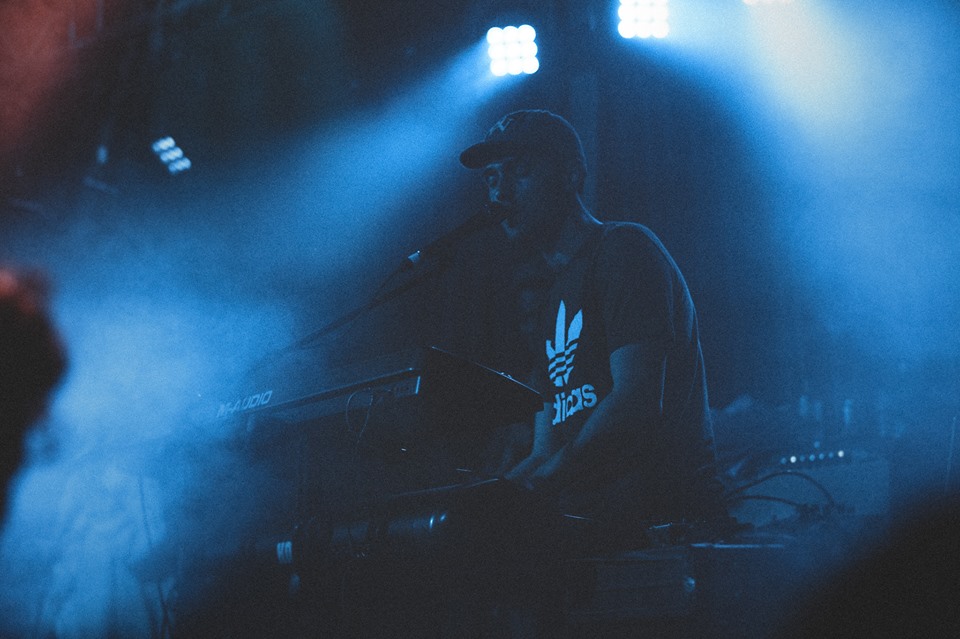 Maybe it’s because his voice is as smooth as a dolphin’s underbelly, maybe it’s because I read an article last year where he named his top 3 musical influences as D’Angelo, Radiohead and Fat Freddy’s Drop or maybe it is because the harmonies and tempo’s in his songs can entice a rolling sense of relaxation while simultaneously encouraging the listener to move their body.

Whatever you chalk it up to, there is no denying that there is something quite refreshing about Jordan Rakei.

On March 26th he graced Perth with his presence, performing at Jack Rabbit Slims with an amazingly curated line up of supports.

Grievous Bodily Calm were kicking off their first song by the time I walked in. The sound hit me in the face like a big beach ball I was welcoming with open arms. The drums were off to the left of the stage, the keys to the right and the wall of sound they created ebbed and flowed in fervent waves. Pierced, but not punctured, by the rolling sounds of Matthew on the trumpet, the vibe was gaining momentum. By the end of their set, the guys seemed to be enjoying themselves just as much as the crowd were as we all bounced along to this hybrid-jazz-funk that seems to be (finally) infiltrating the Australian scene.

Pow! Negro were up next. Awarded the 2016 WAM Award for ”Most Popular Live Act’ as voted by the public, their performance literally never disappoints. Front man Nelson brings a theatrical element to their set, his facial expressions and lucid dance moves are their point of difference; luring the patron into their narrative that is far from being based on fiction. Watching them perform padded out songs that grew from short verses heard in sets they played early least year is a pleasure and personally I can’t wait for their EP in October. The dynamics between band members are a joy to watch (re: Rhys on the drums) and the ambience is contagious as more people flooded to the dance floor while they finished their set with some old crowd favourites.

Ruby Ruby Ruby. It is hard to believe such a huge voice comes from such a petite lady but ya know what, it does and it’s amazing. I always feel myself getting wrapped up in emotions when I hear Ruby May sing because she is just that good. Her sunshine soul radiates through her voice and when she performs with the Chakra Khans it’s feels like a huge yet intimate family reunion everyone is over the moon to be invited to.

All these soulful sets were sandwiched with beats from Nicole Filev who dosent even really need introducing. Her name is associated with a good time in the local scene as she brings those disco and funk bangers most of us can’t remember the name to but LOVE so it’s like kind of bittersweet but of course you dance your little heart out to the track while you can.

Born over the ditch in New Zealand and currently based in London, Rakei finally hits the stage and cascades straight into his set. Seeing him perform with a full band, their dynamics and ability to merge perfectly produced production with creative improvisation is immaculate. Their enjoyment apparent. Rakei is not only an amazing singer but a multi-instrumentalist and his talent for creating perfect compositions is evident when he is performing on stage. Every inch of his body sways in time as all the impeccably placed sounds take the audience through a range of genres, all without missing a beat. ‘Blame it on the Youth’ was a highlight, a slow jam, crammed into a funky set that didn’t bring the tempo down at all.

Music consumers are looking for more. They’re looking for that human connection in their selection, the emotions, the soul and the improvisation of the essence of living through sound. We are seeing less of a lean towards the segregation of genres and more ‘fusion’ compositions. Hip-Hop artists rapping over jazz-noise, the funk of rnb mashed with catchy punk riffs, nothing is off limits – think Tom Misch, Questlove and Hiatus Kaiotye.

There is no denying that we are smack bang in the middle of an ‘intelligent music’ surge. In a time period where we are bombarded by different sources, an array of noise, a choice of representation of our identity – we want more than catchy beats and lyrics that get stuck in our heads, we want to feel, to be rattled in both positive and negative ways and Jordan does this oh so well – and I’m not the only one to notice judging by his sold out European shows.

So here’s the thing, I’ve been a bit slack on the ol’ blog posts lately and well I’m going to blame it on the huge amount of great parties going down in Perth at the moment/this Summer/actually always.

To make up for it I’ve got a tasty little morsel of an interview with Hindley.
Always the creator of his own narrative, Alex Hindley produces, creates, interviews and writes, and I’ll bet a red lobster that list will expand as each project he undertakes strengthens his own brand of creativity.

Describe your sound in 5 words, please.
Music for hate, for love.

I really vibe the artwork you choose to feature with your tracks, what is the process behind this?
I usually like to either create them myself or source an artist who’s work I admire. For example the WEAK, Dejection Psalms and Migraine covers are my design, but I’ve had art commissioned by Oliver Haidutschek and Feeb Lee or used art with permission from artists like Erin M. Riley.

A lot of people have said that Perth is in a slump, while others say the creativity scene has never been better. How do you feel about Perth right now?
Perth is a beautiful nightmare. It’s easy for diverse and unique talent to stand out, the acts who deserve a pedestal to play on, however it’s just as easy to fall from narcissism or climb from infamy.

When can we see you live next?
Always planning good live shows but I’d love to see the people come down for the 9th Beat down competition.

Your Top 5 Local Artists who are killing it on Soundcloud…
In no ranking;
Chiseko – Deep love for hip hop, no time for wave riding.

Your Girl Pho – Old mate Phoebe has one of the most dynamic voices and interesting production teams in Perth.

Tobacco Rat – Easily one of the most intense live performers in Perth, cares for the craft, creates for the dark.

MAX BLACK – Impossible to deny the natural quality and flourish Max has with production, every new drop is always gold.

Also Kopano, my friend/collaborator/mentor is set to release big things on her soundcloud (and elsewhere) very soon so keep the peepers peeping.

Check him out on Triple J Unearthed here, Soundcloud here or Facebook here.

The Cry ~ Created by Raewyn Hill

Co3’s stunning new work, the cry, is a visceral and powerful dance piece that explores the highs and lows of human existence. Created by Co3 founding Artistic Director, Raewyn Hill, and featuring the extraordinary Co3 dancers, The Cry slowly unfolds the inner landscape of ordinary lives, where characters collide, reconcile and gather strength in situations requiring recovery and survival.

Showcasing Hill’s unique movement language, and set against a stark and clinical backdrop, the cry is invigorated by a newly commissioned score played live on-stage by international musician and composer Eden Mulholland (NZ).

MoveMe Festival
Four days of new Australian dance, right here in Perth. MoveMe Festival lets you experience an arts festival in a radically new way. One pass gets you into all the main events as the Festival transforms the State Theatre Centre of Western Australia for a week of big new shows and big new ideas.

See Mitch and Andrew on stage in September at the State Theatre Centre of WA for the 2016 MoveMe Festival. 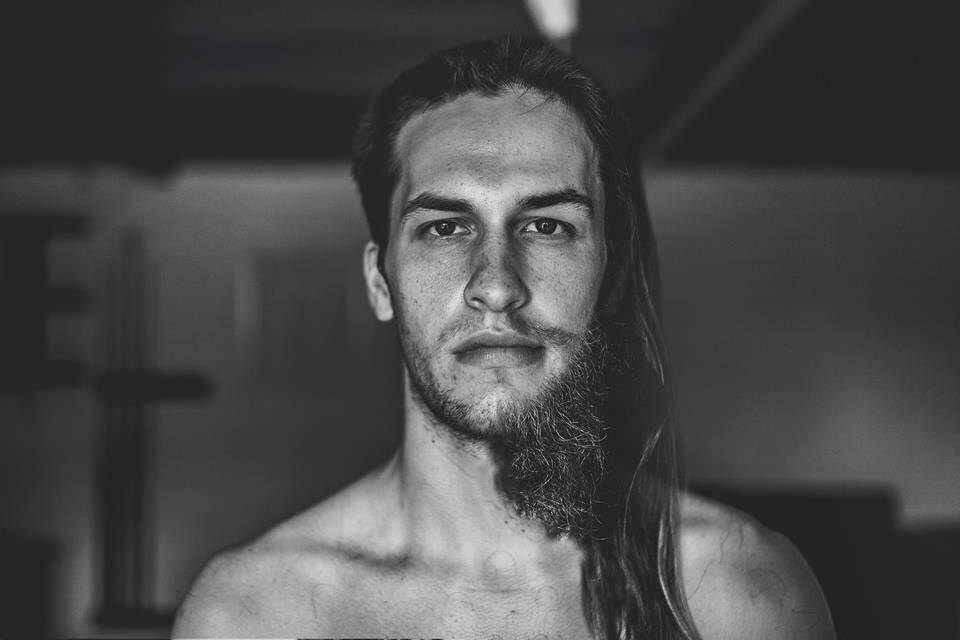 Boykie are a mix of talented local musicians who span a heap of genres, coming together after lead signer, Sam, sought out a band for his solo project.
Their catchy hooks and eclectic mix of pop and grunge make for a sweet outrageously energetic live show.
Definitely one to keep your eye on in the coming months.

You’ve got some pretty cool creatives involved in the making of this including local guy Periwinkle on the album artwork and Will Bowden mastering – how did you form these relationship’s and get the  on board? Sam: You are very right, luckily I have managed to find some pretty amazing collaborators. Perry is an old uni friend I met during my first and only year at UWA in 2012 (I’m still technically “deferred” lol). At the time I think he was studying a BCom while shooting a bit on the side for fun. Well as it turned out, he was pretty damn good at it. What was once a hobby became an intense passion and ended up motivating him to drop out of uni and invest in some serious gear. 4 years later he has become a household name around the city amassing a growing total of almost 6,000 likes on Facebook and 37.8k followers on Instagram. What I love about Perry, apart from him generally just being a very loveable dude is that for some weird reason I can always tell when I’m looking at one of his shots, he has cultivated a very distinctive style and I’m super proud of him. He captured my vision for the EP artwork perfectly and I couldn’t be happier or more grateful.

As for Ol’ Willy Bowden I have the producer of the EP Andy Lawson (Eskimoe Joe, Gyroscope, Tired Lion and Verge Collection) to thank for introducing me. Well kind of, he lives in Tassie so we’ve never actually met. But thankfully email exists. They are a bit of a dynamic duo, I recommend both of them very highly to anyone needing somoen to mix and or master their music. Hell Andy can even help you record. 😉

You’ve said the single ‘Family Man’ is about your Dad, what emotions are attached to the song? Is it difficult or uplifting to perform?
Pwoah, emotions hey. Well I suppose mainly the realisation that my parents are human beings and not some animatronic robots created to serve me. That was a doozie. And then being so thankful for the wonderful life and upbringing they’ve given me. So an uplifting sensation I’d say would be the most accurate.

Where did you get the name Boykie?
It’s an old Afrikaans slang word that means “little boy”, and it was also the name of my first dog.

In one sentence, how would you describe your sound?
Folk-grunge.

Any pre-gig rituals?
Usually arguing about the set list haha.

If you were on death row, what would be your 3 course last meal?
Fried Chicken, Fettecinnnie chicken pasta and a 24 pack of mixed Krispy Kremes. In that order.

Boykie is playing tonight at Jack Rabbit Slims and it’s FREE ENTRY so go check them out  ~ ! 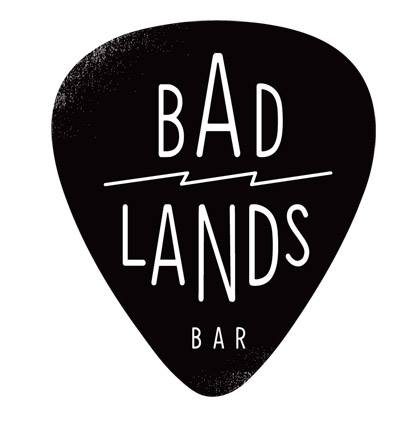 You’re pretty predictable, like don’t get me wrong, I like it.
It’s good because I know you’re going to enjoy this news.

The wait is over!

Badlands Bar is officially launching this Saturday night with grunge rock heroes The Love Junkies as well as Pat Chow, Jacob Diamond and Lazy Horse in the Main Room from 7pm until 11pm.

If that hasn’t caught your attention (???) Hyla and Skullcave will kick off late shows in the Small Room while DJ Beryl Streep will keep the party going in the Main Room from 11pm until 2am.

So thats 3 rooms, plus a smoker friendly beer garden, a stack of live music and food trucks.