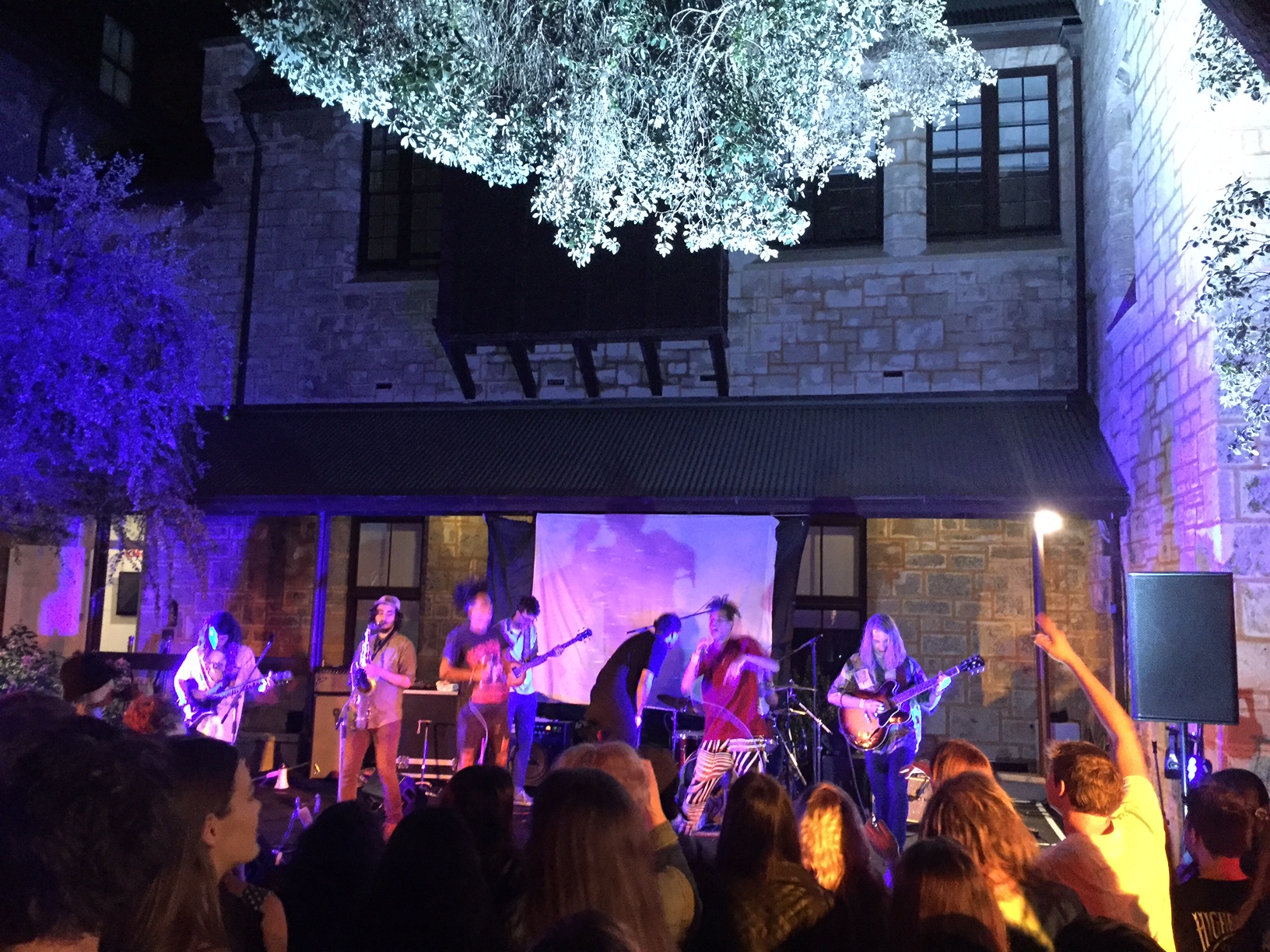 As far as gigs go, this one was probably the nicest smelling one I have attended.

I don’t know where it came from really. I don’t know if it was the lady’s shampoo I was standing near or if someone was burning some incense in an art room or whether I am just slightly unhinged… but god damn it smelt like musk Lifesavers and it was so great.

So pair this with the comforting ambiance of Fremantle Arts Centre and a night that’s slightly colder than perfect and BAM you have got a good time.

Henry Kissinger – the better one – is surprisingly cool. He’s probably my new favourite keyboardist (sorry Ray Manzarek) thanks to his bass fueled loops and beats that make me dance quite good without having to think about it too much.

Ziggy’s performance is astounding. I love Hip Hop. A lot. Discovering a new local artists I can listen to at home and follow throughout their career is why I keep going to gigs really. That and the exercise I guess. So give these guys a listen if you like your breakbeats and flows. Ups to JCAL as always, as well.

POW Negro hardly need an introduction sentence anymore. If you live in Perth you’ve probably already witnessed their wondrous live performance; theatrics, musical instruments and now these amazing visuals, and well if you live anywhere else, you can’t claim to be the music connoisseur of your mate group unless you know these guys, sorry.

On this particular Friday night, the gang was launching their single ‘Money for Portraits.’ The song in its self is a banger. Not just because its catchy but because its arranged nicely. The verses have great lyrics, the bridge is a highlight and really pumps you up for the riff driven chorus.

When I said musical instruments before I wasn’t just drawing attention to the fact this band plays instruments (shocking, I know) but more that Pow! Negro are a breed of artists that interchange the composition and roles of their members frequently.

This reminds me of A – The Beatles and B – the struggle millennials are facing to get a job; no one’s going to look twice at you soon unless you bring that little bit more to the table.

The drummer sings, the guitarist plays drums, there is a saxophone, singing and rap intertwine, there is dancing, banter and so on and so forth. I love it, but also am exhausted by the dynamics, which isn’t necessarily a bad thing.

I guess the band it’s an accurate representation of life. Without stating the obvious, we all know art is a perception of society so what I am trying to say here is Pow portray feelings of the community on a small scale and humanity on a global scale well, which is ah kind of necessary, but a bit deep for a single launch review.

I existentially wonder what is next for music. I love the hybrid everything that seems to come with conscious human evolution condensed into one lifetime, but also still love simple well-though out compositions. Really, I don’t know what I want and I am sure you don’t either but that being said we can figure it out together. Something to look forward to in this post-truth world.

As an audience member and a music consumer I can kind of tell that each member is bringing their own vibes to the table behind the scenes and then as a band they pick up what’s good and work on something from that – obviously beautiful cooperation.

It really is ‘Zac de la Rocha-ish,’ but to be honest I’m sick of people comparing them to Rage Against the Machine. Like that’s accurate but lazy and they’re so much more.

They’ve nailed the funk, the melody and the jazz. Next up I would love to see more slow jams. They already have one or two – check out Sam | Saim on Soundcloud – which they pull off well.

RacketBall goes off as always and when performing ‘Hidle Ho’ they are joined on stage by Ziggy and MC Marley which made everyone smile. Trust me, I genuinely looked around and took note and everyone had their pearly whites on show.

A lot of their music is still not available online, or rather has been quite scarce in the past but with their Big Splash 2016 win, hopefully we will see more recordings pop up on the World Wide Web.

So anyway, that’s enough tangents from me – to wrap it up, can’t wait for the EP.